31 Days of Halloween (2018): Lovecraft and the Supernatural

The following essay was first published in Dark Discoveries magazine.

Ask a horror fan to name their favorite purveyor of the supernatural, and H.P. Lovecraft might show up high on their list. And that raises a curious question. Is Lovecraft a writer of supernatural fiction at all? 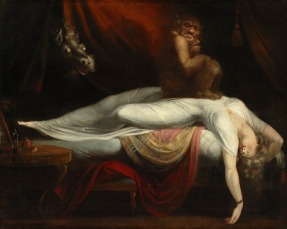 I can feel your questioning looks. After all, Lovecraft’s writing is awash with gods and goddesses, with beings that can live forever, transcend time and space, and bend men’s minds to their will. He wrote an essay called “Supernatural Horror in Literature” for Nyarlathotep’s sake!

And I’ll grant you that. But stick your spades in again and dig deeper. Walk with me down this path a little way, and let’s see what we can find. What is the foundation of the cosmic mythology that August Derleth came to call the Cthulhu Mythos? Is it magic? It’s certainly something unusual, out of the ordinary. But is it supernatural? Is it mystical? Is it miraculous?

For the most part, the answer to all those questions is no.

Lovecraft, in his seminal essay on supernatural horror, began with a statement that is as profound as it is obviously true: “The oldest and strongest emotion of mankind is fear, and the oldest and strongest kind of fear is fear of the unknown.” But the unknown need not be the mystical or the magical. It could just be…the unknown. The empty, darkened alleyway, the black depths of the sea, the empty, long abandoned mansion—they frighten us, whether we believe in ghosts and ghouls and spirits or not, because we simply do not know what they might hold. Think of it this way—there’s nothing more frightening to college freshmen than a test on a subject they haven’t studied. There’s a reason that dream haunts long after classes have ended.

Take that thought and expand it. Stretch it out and see where it goes. Take it to its farthest limits. They called the stories Lovecraft wrote cosmic horror for a reason, and many of his tales represent the first horror science fiction. The great unknown of the wider universe can hold many secrets. And just as a technology, sufficiently advanced, will appear magic to the uninitiated, the beings that walk in the vastness of space will appear gods to humanity.

Our perspective, after all, is limited to the earth we inhabit and the things within it. We can imagine something beyond that, but most philosophers would tell you that even our imagination cannot escape the natural world and the limits of our experience.

There’s a reason most of the aliens on Star Trek all look basically the same. There’s a reason that every monster is either an amplification or an amalgamation of something we already fear. A giant is just a really big guy. A dragon is a snake or dinosaur with wings that can breathe fire. Even in Cthulhu, we see the combination of a dragon like thing and a cephalopod. Our imaginations simply cannot comprehend of something that is truly beyond.

And that’s what Lovecraft was reaching for. In his essay, “Notes on Writing Weird Fiction,” he wrote this:

I choose weird stories because they suit my inclination best—one of my strongest and most persistent wishes being to achieve, momentarily, the illusion of some strange suspension or violation of the galling limitations of time, space, and natural law which for ever imprison us and frustrate our curiosity about the infinite cosmic spaces beyond the radius of our sight and analysis. These stories frequently emphasise the element of horror because fear is our deepest and strongest emotion, and the one which best lends itself to the creation of nature-defying illusions. Horror and the unknown or the strange are always closely connected, so that it is hard to create a convincing picture of shattered natural law or cosmic alienage or “outsideness” without laying stress on the emotion of fear.

Interestingly, from this perspective Lovecraft seems far more intrigued with stretching the bounds of human understanding than he does on writing a good horror yarn. That already puts him in a different stance than your run-of-the-mill writer. Most of us start of wanting to scare, and if we manage to make some deeper statement than that along the way, all the better. Not Lovecraft. His unflinching focus on what causes fear and not the fear itself is one of the reasons few can match his vision.

One wonders if it is also one of the reasons that Lovecraft’s writing is decidedly non-supernatural. Lovecraft doesn’t need ghosts and ghouls to scare you. He knows that the unknown is good enough. And his interest in the cosmic keeps his feet firmly grounded on earth. So his “gods” aren’t really gods at all. Or, I should say, they are only gods to us because we cannot comprehend them. They transcend space and time in a way we cannot comprehend, but their actions need not be seen as magical. They can live so long that death seems impossible, but that doesn’t mean they are immortal. They are responsible for the mighty cities of antiquity, but they built them with methods we simply cannot understand.

It’s perhaps not surprising then that the Ancient Alien Theory itself also denies the supernatural. Stories of gods, angels, and heavenly visitors are explained as simple misunderstandings. The primitive peoples that encountered these beings could not understand them, so they made up stories about gods and goddesses and developed elaborate cults and rituals to worship them and keep the stories alive. Remind you of the Cthulhu Mythos? It should.

It’s an open question whether Lovecraft intentionally avoided the supernatural or if it simply sprang from his tendency to embrace scientific theory over religious belief. And it is not the case that supernaturalism is absent entirely from Lovecraft’s cannon. There are stories where it makes an appearance, sometimes a dominant one—“In The Vault” and “The Hound”, for instance. But they are the exception, not the rule.

Take one of this stories that would appear, on the surface at least, to be one of his most supernatural—“The Dreams in the Witch House.” The story centers, after all, on a witch—who fears crucifixes no less— and has a human-faced, rat familiar. But the story is actually quite striking for how grounded it is in exotic scientific theory from the very first. Our hero, Gilman, is a mathematician, and he has determined that Keziah Mason—noted witch who fled Salem ahead of the hangman’s noose—may have possessed knowledge far more important than common spells. Lovecraft writes:

Non-Euclidean calculus and quantum physics are enough to stretch any brain; and when one mixes them with folklore, and tries to trace a strange background of multi-dimensional reality behind the ghoulish hints of the Gothic tales and the wild whispers of the chimney-corner, one can hardly expect to be wholly free from mental tension… There was much in the Essex County records about Keziah Mason’s trial, and what she had admitted under pressure to the Court of Oyer and Terminer had fascinated Gilman beyond all reason. She had told Judge Hathorne of lines and curves that could be made to point out directions leading through the walls of space to other spaces beyond, and had implied that such lines and curves were frequently used at certain midnight meetings in the dark valley of the white stone beyond Meadow Hill and on the unpeopled island in the river. She had spoken also of the Black Man, of her oath, and of her new secret name of Nahab. Then she had drawn those devices on the walls of her cell and vanished.

Now that’s some heady stuff. Essentially, Lovecraft is describing Keziah as a member not of a witch-cult, but some black magic mathematician’s club that possessed knowledge far beyond our own, knowledge she could use to warp space and time. Her ability to appear and disappear at will was the result of mathematical formulae, not spell books and black cats. Later in the story, Lovecraft discusses the consequences of such a discovery.

It was also possible that the inhabitants of a given dimensional realm could survive entry to many unknown and incomprehensible realms of additional or indefinitely multiplied dimensions—be they within or outside the given space-time continuum—and that the converse would be likewise true. This was a matter for speculation, though one could be fairly certain that the type of mutation involved in a passage from any given dimensional plane to the next higher plane would not be destructive of biological integrity as we understand it. Gilman could not be very clear about his reasons for this last assumption, but his haziness here was more than overbalanced by his clearness on other complex points. Professor Upham especially liked his demonstration of the kinship of higher mathematics to certain phases of magical lore transmitted down the ages from an ineffable antiquity—human or pre-human—whose knowledge of the cosmos and its laws was greater than ours.

In that paragraph lies the entire theory behind the Cthulhu Mythos, and it is utterly devoid of supernaturalism. In fact, it explains away “magical lore” as complex mathematics. This is stunning stuff, particularly for the early 1930s when it was written. One could say with confidence that Lovecraft is one of the first writers to take the scientific theories of the day and so convincingly turn them to fiction. And that is a testament to his genius.

In this way, Lovecraft spans a gulf. His stories are fantastic, but many of them can be so thoroughly grounded in plausible scientific theory that it is difficult to call them supernatural. Which is not to say there’s nothing of the supernatural in Lovecraft. Of course there is. But that supernaturalism is not at the heart of Lovecraft, and that is the key.

Lovecraft proves that the core of the horrific lies not in supernaturalism itself, but in what supernaturalism represents—a break from the reality we expect, and a sightless plunge into the abyss of the unknown.