The Mind Blowing Truth About The Terminator Series

News broke last month that Paramount is rebooting the Terminator franchise—to the tune of an entire new trilogy. There’s even talk of Arnold returning to his role as the T-800, though one wonders why the machines would pattern the terminator after an old man. Infiltrating old folks homes, perhaps? 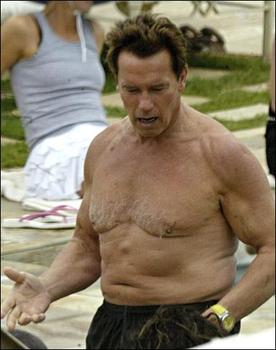 I’ll be back…after my nap.

But the bigger question I have for Paramount is whether they will address the central paradox at the heart of the Terminator series, one so mind-blowingly brilliant that I wonder if anyone involved with the series actually meant for it to happen. Or if, like a young Arnold’s rippling muscles, it just came about naturally.

What paradox is that, you ask? Well, it starts with the fact that . . .

1. John Connor wouldn’t exist if the Machines had never sent back the Terminator in the first place.

Others have made similar points before, but they’ve never taken it to the logical conclusion I’ll get to later. For those of you who somehow missed out on a decade of pop culture (and, uh, spoilers?), in the original Terminator, the governor of California travels back in time in the form of a murderous cyborg, intent on killing John Connor, the leader of the future resistance against our machine overlords, known as Skynet. Being clever, the robots choose to kill Sarah Connor before John is even a twinkle in her eye. It’s the grandfather paradox put to good use. Kill the mother, and the son never exists. Their efforts are futile, however, as our wily Resistance sends Kyle Reese back to warn Sarah, save her life, and ensure that John is born to fight a first day. And ensure it he does, sleeping with Sarah, and impregnating here with the future commander-in-chief of the human forces.

Above and beyond the call of duty…

Already, a weird little paradox is popping up. Let’s review the timeline before the terminator is sent back in time. Sarah Connor was born and lived. Then she had a kid named John. Then Skynet became sentient, nuked the world, and John Connor rose to lead the Resistance. He smashed Skynet’s defense network, and in one last desperate attempt to survive, Skynet sent back a terminator to kill John Connor’s mother. But wait. How does John Connor even exist in the first place in this timeline?

But it gets weirder.

2. Skynet wouldn’t exist if Skynet had never sent back the Terminator in the first place.

In Terminator 2, Skynet takes another shot at John Connor, this time when he is a sniveling ten-year-old (Seriously, did anyone realize that Edward Furlong was supposed to be playing a kid barely in the double digits? He was 14 when Terminator 2 debuted in 1991, and he looks it, too). 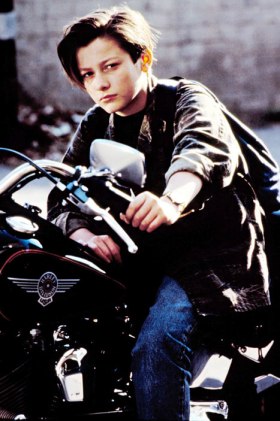 But wait, there’s a twist! Come to find out, Skynet only exists because the remains of the first terminator were discovered by Cyberdyne, who then reverse engineered the technology in order to design the computer program that eventually nukes the world. Basically, Skynet’s daddy is the terminator from the first movie. And, following the same time-travel paradox arc as John Connor, Skynet only comes into being because it sent the terminator back in the first place.

Both Terminator and Terminator 2 can be viewed in a completely different light when you start thinking about all this fatherhood stuff. The movies are like Mama Mia without Abba, the dancing, or Pierce Brosnan’s terrible singing.

And because the internet has thought of everything…

Terminator 3 manages to twist this pretzel even tighter.

3. After Rise of the Machines, Skynet knows that it is responsible for John Connor’s birth.

In the first two Terminators, Skynet tries—and fails—to mess with the timeline. But in Rise of the Machines, there’s a whole lot of messing going on. Think about it. In the first Terminator, all Skynet knew was that John Connor was the leader of the Resistance and that Sarah Connor was his mother. The same knowledge applies for Terminator 2. But then something changed in Terminator 3. The T-X was sent back not only to kill John Connor, but also to help facilitate the rise of the machines and Skynet’s conquest of the globe. In doing so, she imparted knowledge to Skynet about the past and the future. By the time we get to Terminator: Salvation, Skynet knows that Kyle Reese is John Connor’s father. It knows that he goes back in time to stop their first effort to kill Connor. And what would Skynet do with this knowledge?

4. Skynet must decide not to send back the terminator to kill John Connor.

All Skynet has to do to stop John Connor from being born is to never send a terminator back to kill him in the first place. In that case, there’d be no reason for Reese to go back, and even if he did, no reason for Sarah Connor to fall in love with him. Reese would just be a crazy stalker raving about saving the future by getting into Sarah Connor’s pants. It’s a creative pickup line, but one that’s unlikely to work. And because he would fail, John Connor is never born, and Skynet never loses the war.

Now, you might think there’s a problem for everyone’s favorite self-aware killing machine. If John Connor is never born, then Skynet never exists, because Cyberdyne never discovers the remains of the first terminator, and it never develops the software that gives Skynet sentience. But that’s not quite true. We know that Cyberdyne used the technology to make advances in the company’s thinking on cybernetics, but that doesn’t mean that it never would have made those leaps without a little help. And besides, Skynet can always send an arm back in time and drop it in Miles Dyson’s lap.  Then Skynet exists, John Connor doesn’t, and Skynet wins. Right?

Actually, not at all. Remember that first paradox? The one about John Connor never existing unless John Connor sends Kyle Reese back to father him? There’s really only one way for that to work, and once you understand it, you see the secret brilliance of the entire Terminator series.

Forget everything the movies teach you after the first five minutes or so of the first Terminator. What do we know happened before there was any time-travel, before anyone went back in time to kill or save another person? We know that someone named John Connor existed. And we know that the real John Connor, the one that defeated the machines and caused them to send back the T-800 to kill him, was not the son of Kyle Reese. He was fathered by a completely different man, a man that Sarah Connor met at a point in her life when she did not know there would be a Judgment Day, a man who helped to mold John Connor into the warrior he would become.

And that means that Kyle Reese, by intercepting and impregnating Sarah Connor before she could meet this man, did the one thing that Skynet never could do.

Oh sure, Sarah got pregnant and she named her son John, just as the person from the future told her she should do. But that’s where the similarities between the two men she calls her children end. The new John Connor lives off of his alternate self’s accomplishments. He believes that he is supposed to lead the Resistance because the real John Connor did. People believe in him because of what a man who never came to exist accomplished in an alternate timeline. That’s why John Connor in Terminator 3 has such doubts about his ability to fulfill his destiny. He can’t, because he isn’t John Connor. And that means . . .

6. By doing the most logical thing and not sending back the terminator to kill John Connor, Skynet is destroying itself.

Skynet is holding a gun to its own head, and it doesn’t even know it. In the wake of Terminator: Salvation, Skynet will do the only thing that makes sense. It won’t send back a terminator to kill John Connor. By making this decision, Skynet ensures that Kyle Reese will never go back in time, either. And that means that John Connor will be born in the situation he should be born in, and that the real Connor will rise to lead the Resistance and defeat Skynet.

That is how the Terminator saga ends, my friends, with Skynet doing the one thing that will lead to its own destruction—not trying to kill John Connor.

Now you might ask, does that mean that Skynet’s decision to not attempt a preemptive murder would end up restoring the original timeline and starting the whole chain of events all over again, creating an endless loop, an eternal struggle that keeps repeating forever?

Possibly. Perhaps that is how the world ends, with Skynet locked in a paradox. But it is also possible that Skynet is simply creating new timelines in the multiverse. And in each one, Skynet is destroyed. It would seem that in the Terminator universe, not only is judgment day inevitable, but so too is the victory of the human race.

Come with me if you want to live.

Sign up for my email list! I promise not to spam you, and I’ll never give away your information. This is only for BIG announcements like new book releases or Pulitzer prizes won. That sort of thing. Click here to sign up!

74 responses to “The Mind Blowing Truth About The Terminator Series”