Why I Hate Darius Rucker’s Cover Of Wagon Wheel

If you follow this blog, you probably know that I have a passion for music. Maybe it’s born of my complete lack of any musical talent or singing ability whatsoever. Or maybe I just have a good ear. I mean, I’m not bragging, but if you’ve bought any of the albums from my Free Music Friday’s, you are probably listening to some good tunes about now.

In any event, I usually like to save my opinions for the end of the post. But why waste time here? I despise Darius Rucker’s cover of “Wagon Wheel.”

Now, I do love me some Hootie. I mean, just watch this video. It’s Hootastic.

You see, Hootie and his Blowfish represented an entire sub-genre of 90s music. Just look at him jamming up there in his backwards hat. Hootie was a mainstream alternative band, the kind of artist that late-20s, early 30s types in 1996 could like and feel cool, feel like they were still young. They were an easy-listening version of Counting Crows. Less edgy, less mournful, safer. It was the kind of music that your mom would listen to with you. I mean, there are probably people who still think that “Let Her Cry” is the definitive musical statement on drug abuse.

And so, when Hootie turned up 10 years later on country music radio, was there anybody that was surprised? 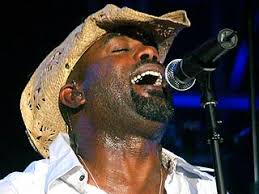 Here’s Hootie in a cowboy hat.

See, country music has been growing in popularity and declining in quality for the last 25 years. Back in the old days, country music could stand toe-to-toe with rock when it came to musical inventiveness and lyrical genius. But pop is the virus that kills all genres, and it made its way into country at the turn of the 90s with a vengeance. Artists like Garth Brooks took country music to new heights, but those who followed him did it by stripping the genre of its soul. Gone were the lyrical genius and musical inventiveness of George Jones, Hank Williams, Conway Twitty, Loretta Lynn, and Emmylou Harris. In were bubblegum pop tunes with a country twang. Today, you have the empty, soulless ballads of bands like Lady Antebellum praised while the heartbreaking genius of groups like The Civil Wars are virtually ignored by country radio. I mean, compare these two songs, one a mega-hit by Lady Antebellum about bad, honey flavored whiskey and another by The Civil Wars about the heartbreak of bad, codependent relationships.

But I digress. The point is that if Darius Rucker was going to go anywhere to rebuild a career built on middle-age, middle-class, white folks from Georgia, country was the place to do it.

And I was fine with that. Good luck to Darius. I mean, it’s awesome to see an African-American face in country music. Shows how far we’ve come. But then he had to go and touch “Wagon Wheel.”

Now, for those of you who sadly do not know this, Darius Rucker didn’t write “Wagon Wheel.” The original version, based on a Bob Dylan riff (as all great music is), was released by Old Crow Medicine Show nearly a decade ago. Darius Rucker’s cover represents everything that is wrong in country music, all wrapped up in a five-and-a-half minute long package. Here they are, back to back. First, let’s watch Darius Rucker’s version.

Let’s compare. First, the music. Old Crow Medicine Show is up there with a stand-up bass, banjos, fiddles, the works. Darius Rucker sounds like he is singing in a karaoke bar in Tokyo. Or like he is performing a polka in Berlin.  And then there is the video itself. OCMS eschews a literal interpretation of the song, with the guys walking down the street hitchhiking, and instead goes for a much more artistic  and ultimately depressing, fairground motif. Basically the guys are playing the song at the most broke down, sad carnival you’ve ever seen. And to make matters worse, they are performing as part of some sort of go-go show. You can interpret that however you will, but I guarantee you that you can get pretty deep with the imagery.

Darius Rucker’s version starts off with him falling asleep, watching Duck Dynasty. I don’t know who made this artistic choice, but it is a perfect one. You see, Darius Rucker doesn’t live “Wagon Wheel.” There’s no rock bottom here, no performing in the worst possible venue. This is all a game for him, a fantasy. And the song mirrors that. This is an upbeat, dance song for Darius Rucker. Just look at the goofy grin on his face. The way the song rises in all the wrong places. How he never let’s the melody fall into the minor chord, how he refuses to let this be a soulful, almost mournful tune.

Cause that’s what it is. It’s a song of desperation, a song about a guy who’s down on his luck, just trying to make it to the next town, praying that another car stops to pick him up. A guy who just wants to get to Raleigh one last time and see the love of his life. And if the guys  to whom he owes a fortune in poker debt he could never pay catch up with him there and kill him, at least he will die free.

Darius Rucker is hitch hiking his way to a show in a bar, and that’s before he wakes up on his tour bus with the cast of Duck Dynasty.

Actually, maybe Darius Rucker’s version is more depressing, after all.