Stumbled upon an interesting movie during my internet wanderings recently–I honestly don’t remember how I even came upon it. It’s called A Genesis Found. It centers on a archaeological dig in Moundville, Alabama during the 1930s by the Civilian Conservation Corps. Moundville, in case you don’t know, is a rather enigmatic ruin in Alabama consisting of ancient Indian burial mounds, some that are upwards of 60 feet tall. During the dig, the young members of the corps stumble upon a find that could have come straight out of Ancient Aliens. 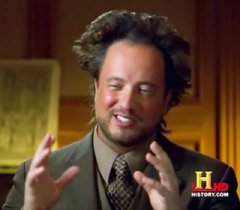 Flash forward to the present day. It turns out that one of the young men on the project from the 30s wrote a best-selling book about what they found in the mounds. Unfortunately, no one believes him–including his own family who is pretty convinced that he was insane. Now his grandson is a student at the University of Alabama, located just down the road from Moundville, and a movie shoot with his brother now has him back in the field searching the mounds for what his grandfather left behind.

A Genesis Found was made for less than $50,000 dollars. Of course, it shows. But while there’s not a whole lot going on with special effects and some of the acting is–questionable–all and all, it’s not a bad flick at all. And some of the actors are actually pretty dang good. Luke Weaver stands out in that department.

If I had one complaint about the movie, it’s that it’s just too long. Nearly two hours is a lot for any horror movie, and the narrative–in addition to be being just a little bit confusing–simply doesn’t justify it. Thirty minutes less, and I’d probably recommend it much more wholeheartedly. As it is, I still think it’s worth a watch (it’s free on youtube, after all), particularly if you are a fan of Lovecraftian stories or Chariots of the Gods type speculation.

Watch the trailer for A Genesis Found.

Tagged as a genesis found, chariots of the gods, movie review