Ghouls of the Miskatonic 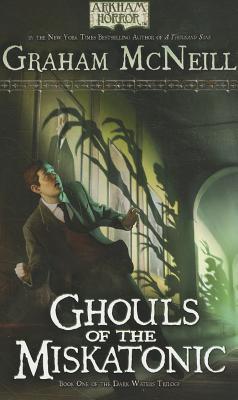 The most frustrating books are those you read and don’t like but can’t figure out exactly why.  Ghouls of the Miskatonic by Graham McNeil is one of those books.  There’s every reason it should be right down my alley.  It’s unapologetically Lovecraftian, set in the mid-1920s in Arkham, Massachusetts at Miskatonic University.  There are lots of ghouls, ancient gods, and cultists creeping around.  And I love the cover (In all honesty, that’s why I bought the book.  Happens a lot.)  But while all the elements were there, somehow the magic was missing.

Ghouls of the Miskatonic tells the story of a whole host of characters.  There’s Amanda and Rita, students at Miskatonic University.  Oliver Grayson and Alexander (I forget his last name because he only shows up when certain plot points need to be revealed) are professors at Miskatonic whose mutual friend, Professor Henry Cartright, is in an insane asylum.  Rex and Minnie work for the Newspaper, and Gabrial Stone is a hard-bitten Pinkerton detective whose daughter has been murdered.  Finally there’s Charles Warren, the (a?) bad guy, and Finn Edwards, a man with a criminal past and a heart of gold.  Apparently these characters are originally from the role playing game, Call of Cthulhu.  The plot involves efforts to resurrect that greatest of Great Old Ones, Cthulhu, from the depths of the South Pacific.  There are some kidnappings, strange technological devices, and an appearance by a Great Old One who has an affinity for fire.

So what’s the problem?  I’ll start with the general and work my way down to specifics.  Something about the writing doesn’t pop.  I’m not sure what it is, and I don’t know how I would fix it.  The book is technically proficient, but somehow, the heart is missing.  It reminds me (and this is probably a weird allusion) of that scene in Black Swan when Padme is auditioning for the title role.  Her dancing is perfect, but it lacks the fire, the passion that is necessary for the part.  I felt the same way about this book.  The fire is missing.

But it’s more than that.  There are some more specific problems as well.  The book has a few parts that are woefully anachronistic.  First, the presence of women at Miskatonic University.  I’m as forward thinking as the next guy, but facts are facts, and there is no way that an Ivy League university (which Miskatonic more or less is) would admit women in the 1920s.  Wouldn’t happen.  Sorry.  Harvard University did not become co-educational until 1973(!).  Yale was way ahead of its time, admitting female undergraduates all the way back in 1969.  And yet, not only does Miskatonic  admit women, but one of them, Kate Winthrop, has her own laboratory.  But it gets better.  One of our main characters, Rita, is an African American student from New Orleans . . . who is on the track team.  Oh yeah, the white captain of the football team asks her out on a date.  And I repeat, this is the 1920s.  That’s the sort of thing that pulls you right out of the narrative.

It wouldn’t have been hard to fix the problem.  Just mention that Miskatonic, being a strange place, was EXTREMELY ahead of its time on race and gender relations.  Shoot, it might even serve to make the place seem all the more unusual than it already is.  Just give me something so that every time Rita is mentioned I’m not questioning the fact that schools didn’t have women’s sports until Title IX.  (And at one point the author mentions “the girls at Princeton.”  Once again, 1969.)

But there’s more.  People say funny things that they shouldn’t be saying.  One cop says to one of the doctors, “You might have come up from Boston with your fancy Yale degree, but this is my town.”  Now, maybe the guy was in Boston and happened to go to Yale, but it seems more like the author wants us to chuckle at the cop’s stupidity.  Harvard is in Boston (or just across the river at least), and here this silly cop thinks Yale is there.  But no New Englander, much less someone from Massachusetts, would make such a mistake.  So it just comes off as wrong.   Later, the book mentions a “faded photograph from 1917.”  Now, I know photographic technology has improved, but were things so bad back then that pictures faded in less than a decade?

Then there are the plot points that are never answered (spoilers ahead!).  Why are all the young girls disappearing?  Who exactly is Charles Warren?  Why was Stone’s daughter killed?  Surely it’s not just to feed beasts.  Were there not less conspicuous people to kill?  Drifters, hobos.  Who is the man in red?  Why are all the apparently bad guys killed by the fire demon at the end, and why would the man in red, whoever he is, do that?  What was the purpose of the sphere?  Where is it going?  Now, I understand this is the first book in a trilogy, but leaving so many questions—many of them basic—unanswered is extremely dissatisfying.  A book in a trilogy should work as one book.  (Imagine if Hunger Games ended right before the games started).  I fear this book does not.

Unfortunately I cannot recommend Ghouls of the Miskatonic to anyone other than the most devoted fan of Lovecraft or the gaming series on which it was based.  There is much that is good about the book, but it simply feel incomplete.  A shame, too.  The cover is awesome.