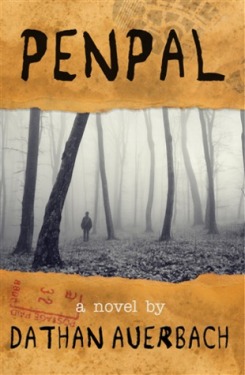 Penpal goes to show that crowdsourcing can work for horror fiction, too. Penpal is an example of creepypasta, 4chan babble for creepy copy and pasted stories. The idea is that you post a story online, usually, but not always, in serial form. People read it, paste it to places like reddit, people comment and question it, and those comments and questions lead to further chapters in the story. Most times it fails miserably. But other times, it functions  as modern folklore, with Slenderman being perhaps the most famous example.

Penpal was created in just this fashion, with the author, Dathan Auerbach, publishing the first chapter on the No Sleep subreddit. A Kickstarter later, and he had a novel that has since gone on to near universal acclaim, and with good reason.

Penpal tells the story of a man who has attempted to reconstruct the story of his childhood, connecting a number of strange vignettes into a coherent tale. The narrator’s problems began shortly after a school project involving an anonymous penpal, only his penpal doesn’t write letters back to him. Rather, he receives Polaroids. After realizing that he is the subject of many of these pictures,things get weird.

Penpal is told in the classic creepypasta style–first person, unpolished, almost stream of conscious at times. The use of memory is particularly effective. Each story has holes, and those holes are only filled in with reflection, after more information is known. The whole experience is deeply unsettling. At times, you feel as though you are locked inside a room with the narrator, wanting to warn his younger self. And yet obviously that is impossible. For you both.

This is a highly enjoyable book. I read it in two sittings. Once you start, you won’t want to stop. Though you might have a nagging desire to check your crawlspace.