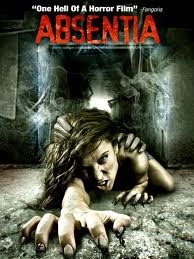 For whatever reason, “intelligent” is a word you rarely use to describe horror movies. Maybe it’s because writers think they can get away with slapping pretty much anything on a piece of paper when they are writing a screenplay. Maybe it’s because characters usually have to do some pretty stupid things to get in horrifying situations. I don’t really know the answer. And that’s why movies like Absentia are as rare as they are pleasing to watch.

I’ll let the distributors of the movie tell you what it’s all about:

Tricia’s husband has been missing for seven years. Her younger sister Callie comes to live with her as the pressure mounts to finally declare him ‘dead in absentia.’ As Tricia sifts through the wreckage and tries to move on with her life, Callie finds herself drawn to an ominous tunnel near the house. As she begins to link it to other mysterious disappearances, she comes to the realization that his presumed death might be anything but ‘natural.’ Soon it becomes clear that the ghostly force at work in the tunnel might have set its sights on Callie and Tricia too.

Absentia is character driven horror with a Lovecraftian bent. Whatever lurks in the tunnel near Tricia’s house has been around for a very long time, something we learn as Callie–who has her own dark secrets in her past–begins to investigate. The terror is, of course, somewhat limited–it’s not like the tunnel is going to move–but it portends a lot of horrifying consequences. If here, why not anywhere? Who can say what dark forces lurk just outside our doors? And where do all those people who just up and disappear go to, anyway?

Well worth the money and time, Absentia is great fun for any horror fan willing to put aside the faster pace and dumber scares of your typical scary flick fare.