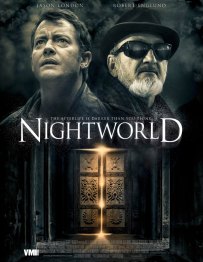 Periodically, the Internet pops out a “10 Best Horror Movies on Netflix Right Now” list. That’s where I found Nightworld. A Bulgarian production, I was intrigued by the presence of Freddie Kruger and that door with all the tentacles on it. What could go wrong?

Turns out, a lot. Nightworld follows our trusty hero Brett (best part of the movie), a former LAPD cop who moves to Bulgaria for some reason only to have his Bulgarian wife kill herself. Bummer. So he decides to move to the big city and become a security guard, cause why not, huh?

Turns out the job is easy. Watch some security cameras inside a sealed room for anything unusual, and if he sees something, report it to a blind guy. Because that makes sense. Brett meets exactly one girl in the process. Of course, they fall in love. This can’t end well, and it doesn’t.

Don’t get me wrong–Nightworld isn’t a terrible movie, and if you’ve got nothing better to do on a Wednesday night, check it out. But don’t expect a well-thought out film. The plot is filled with holes and randomness, and it’s never entirely clear what exactly is going on or why it is happening now.

Bulgaria can do better.