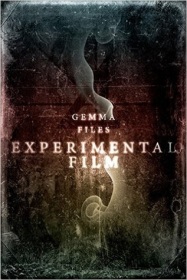 I had been circling Gemma Files’ Experimental Film for a while before finally picking it up. I’m not sure what stayed my hand, but I think it was something in the synopsis that made me wary. Before I go on, here’s that (very long) synopsis for your perusal.

Fired at almost the same time as her son Clark’s Autism Spectrum Disorder diagnosis, former film critic turned teacher Lois Cairns is caught in a depressive downward spiral, convinced she’s a failure who’s spent half her adult life writing about other people’s dreams without ever seeing any of her own come true. One night Lois attends a program of experimental film and emerges convinced she’s seen something no one else has—a sampled piece of silver nitrate silent film footage whose existence might prove that an eccentric early 20th-century socialite who disappeared under mysterious circumstances was also one of Canada’s first female movie-makers. Though it raises her spirits and revitalizes her creatively, Lois’s headlong quest to discover the truth about Mrs. A. Macalla Whitcomb almost immediately begins to send her much further than she ever wanted to go, revealing increasingly troubling links between her subject’s life and her own. Slowly but surely, the malign influence of Mrs Whitcomb’s muse begins to creep into every aspect of Lois’s life, even placing her son in danger. But how can one increasingly ill and unstable woman possibly hope to defeat a threat that’s half long-lost folklore, half cinematically framed hallucination—an existential nightmare made physical, projected off the screen and into real life?

It might be that the synopsis is so darn long. It might be that it puts the emphasis on Lois as a mom, or that it seems to indicate that a large part of the central conflict in the story will be protecting a child, neither of which appeal to me. Whatever the case, I put Experimental Films aside again and again, only to come back to it because there was something intriguing about it that I couldn’t quite quit. I like the idea of haunted film. The ancients thought mirrors were a window to another world. And what is a film but a dim reflection of reality, capturing images of the long dead, presenting worlds unknown and otherwise unknowable? And the film in this book is an old one, very old, locked on silver nitrate film, a medium so flammable that it cost many a life in the early days of the cinema. So what the heck, I thought. Why not give it a shot?

I’m certainly glad I did.

First of all, it turns out my initial concerns were wholly unfounded. Lois is much more than a mom. Her domestic situation plays a role in the book and is, at times, one of the things that motivates her, but it is largely in the background. Lois is an independent woman pursuing a mystery that is obscure and potentially world-changing all at once. On the trail of a film from the earliest days of movie-making that seems to portray a forgotten Wendish god (obscurity squared you might say), Lois finds herself locked in a struggle of Lovecraftian proportions.

Compellingly readable and filled with interesting tidbits about movie culture, this winding tale will keep you on the edge of your seat from the opening title to the final credits. Definitely recommended.

P.S. If you enjoyed this book, check out Cigarette Burns, one of my favorite entries from the excellent Masters of Horror series.