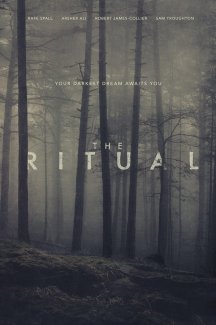 Horror is having its [latest] moment, and the availability of mediums like Amazon and Netflix mean that horror movies which might have disappeared into straight-to-video oblivion ten years ago have a chance to shine today. But The Ritual is a coup for Netflix. This is a movie good enough to go to theaters, and it is can’t miss for anyone with a Netflix account.

Four friends from University strike off into the Scandinavian hinterland to honor their fifth member, killed in a robbery gone wrong. But at least two of the crew aren’t the athletic specimens they once were, and after an accident gives one a bum knee, they decide to take a shortcut through an uncharted forest. Things get bad when they discover the corpse of a large animal hanging from a tree–gutted–and they get worse when they find an ancient idol in a forgotten farmstead. Now something is hunting them, and what started as a camping trip soon becomes a fight for survival.

The Ritual is based on the novel of the same name by Adam Nevill. I enjoyed that book quite a bit, but it was flawed, particularly in its second half. In adapting Nevill’s book, the filmmakers have taken what made the novel great and fixed its shortcomings. And the creature design is inspired. The beast stays just beyond the frame for most of the movie, but the usual disappointment when the monster is revealed is completely absent here. It’s too good for just one movie, and I hope for more exploration of its mythology in the future.

The Ritual is an unmitigated success. Everyone involved should be proud.