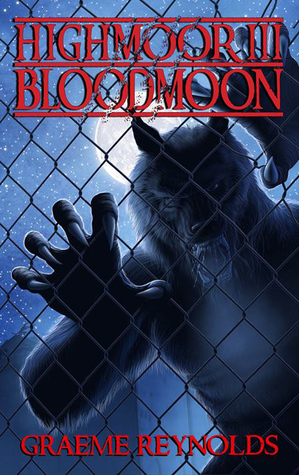 So as some of you know, I recently took the plunge into marital bliss. It would be hard to describe my wife as a horror fan prior to meeting me, but she’s a trooper, and I’d like to think a convert. But there’s one author whose work she simply loves–Graeme Reynolds, master of the werewolf genre, and author of the excellent High Moor series. I love these books too, but on the assumption that you are all sick and tired of read me this month, I let her take the reins and write the review of the final book in the trilogy, High Moor 3: Blood Moon.

Advance review copies of Blood Moon, Graeme Reynolds’ much-anticipated third installment in the High Moor werewolf trilogy have been floating around just in time for this most spookiest time of the year (I received mine just in time for the super blood moon eclipse at that).  Blood Moon starts in the middle of the action, right where Moonstruck left off — if you haven’t read the first two installments recently, go back and read them again while you’re waiting for the official release of Blood Moon.  Reynolds has carefully weaved a complex story with a number of characters and story arcs happening around the world — and they all come together in the end (George RR Martin, take note).

As we’ve come to expect and love from our furry (and non-furry) friends in High Moor, part 3 is full of relentless action, gore, and pack and human drama.  Reynolds is brutal and merciless on his characters and readers alike.  A couple scenes in particular are still sticking with me.  Plus he has truly mastered the art of pacing in this one — don’t expect to be able to put the book down after the midpoint.  No one escapes his treatment, and unlike the pop culture lycanthropes, readers are treated to granular gore involved in the change and the violence inflicted by the weres and humans alike.  There’s no turning away and pretending the whole werewolf business isn’t a bloody mess (which I’m guessing which is just the way Reynolds likes it).
So gird your stomach and strap yourself in for the last ride with High Moor.

One response to “31 Days of Halloween: Guest Review of High Moor 3: Blood Moon”