From the Lovecraft eZine: Is True Detective Built on Plagiarism?

If you follow this site, you know that I was a huge fan of True Detective, from the first word to the last. I praised it here, I’ve nominated episodes for Bram Stoker Awards, I’ve told everyone I know to watch it. It’s a great, entertaining show that has seeds of weird fiction sown throughout it. Which is why I was particular disturbed recently to see this headline from the Lovecraft eZine–“Did the writer of “True Detective” plagiarize Thomas Ligotti and others?” I was even more disturbed to read the article. (I’d ask you to read the article now, but if there’s one thing I’ve learned form the subsequent uproar, it is that some people refuse to read the underlying material in a debate, no matter what.)

The rather lengthy article describes in fairly detailed fashion how True Detective lifted ideas and even entire pieces of dialogue from the book, The Conspiracy Against the Human Race by Thomas Ligotti. Ligotti is a somewhat obscure fiction writer with a devoted following who also dabbles in philosophy, particularly the antinatalism Rust Cohle is known to wallow in. This woe-is-me, it-were-better-if-I-were-never-born blather is a favorite of depressed high school students and misanthropes the world over.

As should be clear by now, I do not adhere to this “philosophy.” In fact, one of the reasons I liked Rust Cohle’s character so much is that he seemed to me to be a walking, talking, reason to reject antinatalism. He’s a screwed up, tragically compromised character who relies on a non-orthodox–and ironically self-aggrandizing–ethos to even get through the day. Others seemed to miss this entirely and set up Rust as an anti-hero to be adored and followed, which made their tears of disappointment at *SPOILER ALERT* Rust’s final episode conversion so delicious. 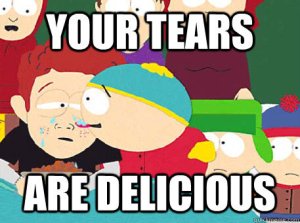 An example of how one acts when hat-tipping another artist.

So while I recognized that Ligotti and other antinatalists influenced the writers of True Detective, that’s where I figured it ended. The article linked above makes it clear I was wrong. I won’t rehash it here–once again, you can read it yourself–but the evidence is unsettling. Is it as blatant and endemic as some famous examples of plagiarism (I’m thinking of Kaavya Viswanathan’s How Opal Mehta Got Kissed, Got Wild, and Got a Life)? No. Is it as thoroughgoing in its borrowing of ideas as Dan Brown was accused of being in The Da Vinci Code vis-a-vis The Holy Blood and the Holy Grail?  Probably not. But clearly, something is going on here.

Is it homage or plagiarism? I can’t say. That line is blurry indeed. But just for the heck of it, compare these examples of now-acknowledged plagiarism from Viswanathan’s book and then what happened with Ligotti and True Detective. In both examples, the first is the original, the second, the alleged plagiarism.

Sloppy Firsts: “He was invading my personal space, as I had learned in Psych. class, and I instinctively sunk back into the seat. That just made him move in closer. I was practically one with the leather at this point, and unless I hopped into the backseat, there was nowhere else for me to go.”

Viswanathan: “He was definitely invading my personal space, as I had learned in Human Evolution class last summer, and I instinctively backed up till my legs hit the chair I had been sitting in. That just made him move in closer, until the grommets in the leather embossed the backs of my knees, and he finally tilted the book toward me.”

Ligotti: “We know that nature has veered into the supernatural by fabricating a creature that cannot and should not exist by natural law, and yet does.”

Cohle: “We became too self-aware. Nature created an aspect of nature separate from itself. We are creatures that should not exist by natural law.”

In Viswanathan’s case, multiple works were found to be plagiarized. In the case of True Detective, when the series concluded, many on the Internet immediately noticed that the end was taken, virtually whole cloth, from one of Alan Moore’s comics. See for yourself.

Reactions to the Lovecraft eZine have spanned the gamut from outrage at True Detective to absolute apathy and shoulder shrugging to accusations that the eZine is engaged in yellow journalism and just out for some cheap site clicks.

I’m not sure where I stand, but I can say that the last accusation is unfair and unfounded. In full disclosure, I am a fan of the eZine and a friend of Mike Davis. I know that Mike struggled with whether or not to publish this article. The eZine has 150,000 followers and produces loads of material; he didn’t need the clicks, and he certainly didn’t need the headaches that he knew would come from sharing this information with the world.

But put aside why Mike did it and think about the message we are sending by attacking him for his decision. Frankly, our tendency to attack the messenger simply means that in the future the public will be less likely to learn of instances like this, and less able to draw our own conclusions. I am not sure whether or not the writers of True Detective engaged in plagiarism, but I am glad the Lovecraft eZine brought the matter to light and for debate.

Since the original publication, the eZine has posted this follow-up article.

And for those who are quick to scream, “Fair use!” read this story about Brad Vice, author of the Flannery O’Connor Award winning collection, The Bear Bryant Funeral Train. For acts of plagiarism he thought were fair use and in homage to a work written in 1934, his award was revoked, his contract rescinded, and copies of his book pulped. I may own one of the few that survive.

Note: Obviously, there are many articles taking the opposite view of the eZine, and I’d advise anyone who’s interested in a fulsome view of the issues to read them as well. Here’s one, and here’s another.

One response to “From the Lovecraft eZine: Is True Detective Built on Plagiarism?”