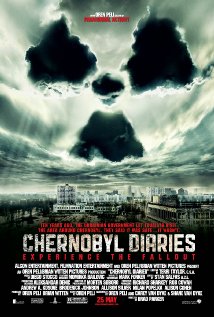 There are few places more evocative and more truly horrifying than Prypiat, the city that serviced the reactors at Chernobyl. A modern city of 50,000, abandoned in a matter of days, everything left behind, frozen in time by the radiation danger that sealed its fate. If ever there was a place to set a horror film, Prypiat should be it.

Which is one big reason that Chernobyl Diaries, a found footage horror movie from the creators of Paranormal Activity, is such a disappointment. The movie starts off strong. Four friends join an extreme tourism excursion to Prypiat, with the promise that they will see things that few alive have borne witness to. But when they arrive, the guards turn them away, much to the chagrin of their guide (and the best character in the film), Yuri. Not to be deterred, our intrepid explorers break into the city through a back gate. But once they begin to explore the ruins of Prypiat, they begin to suspect that they are not alone.

The strength of Chernobyl Diaries is obviously Chernobyl and Prypiat themselves. The movie does a fantastic job of recreating the abandoned cities, and the period while the group is exploring the city—before anything unusual at all happens—is the best part of the film. But once things go badly, the film lurches into cliché and typical horror movie territory. People do stupid things they shouldn’t do. They split up. They refuse to stay in places of relative safety. They turn their backs to dark hallways.

Chernobyl Diaries is pretty standard bad horror movie fare. And that’s a shame. It started off with so much potential.

P.S. In March, I took my own trip to Prypiat. If you are interested in checking out the pictures, click here.